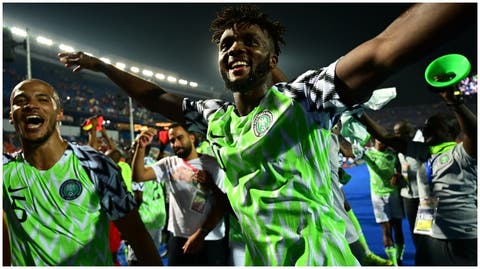 William Troost-Ekong’s late winner sent Nigeria through to the semi-finals of the Africa Cup of Nations on Wednesday after a tense 2-1 victory over South Africa in Cairo.

Samuel Chukwueze fired the Super Eagles ahead in the first half in front of a healthy, largely pro-Nigerian crowd at the 75,000-capacity Cairo International Stadium.

But Bongani Zungu’s looping header brought South Africa level on 70 minutes, the goal awarded with the aid of VAR — introduced for the first time at the tournament from the quarter-final stage onwards — after it was initially ruled out for offside.

A number of promising attacks fizzled out for Nigeria and their lack of precision came back to haunt them when Zungu hauled South Africa level, nodding back across goal after a Percy Tau set-piece was shown upon a video review to have been flicked on by Ighalo.

Dr. Anu Adepoju and Medcontour: The Reign of Impunity and Citizens...