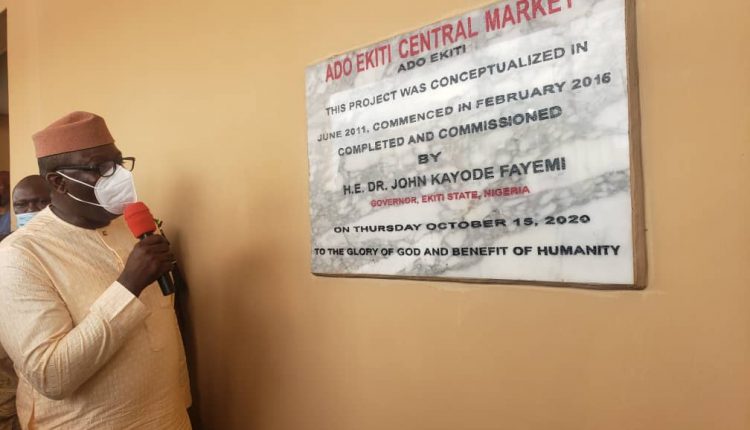 The Ado-Ekiti Chapter of the People’s Democratic Party (PDP) has condemned the Ekiti State Governor, Dr Kayode Fayemi, for arbitrarily changing the name of the popular market from Oja-Oba Market to Ado-Ekiti Central Market.

Otunba Kayode Yusuf, chairman of the party, who spoke with newsmen after a stakeholders’ meeting at the party secretariat in Ajilosun, Ado-Ekiti, said, “What Governor Fayemi has done is a mockery of the Omoluabi ethos of an Ekiti son and a well-orchestrated attempt to bring the traditional institution of Ado-Ekiti into disrepute. He arrogantly changed the name of this popular market from Oja-Oba Market to Ado-Ekiti Central Market with the sole aim of spiting our revered Kabiyesi. This idea of mocking our heritage or destroying our values at every turn should stop.”

Yusuf disclosed that the Oja Oba Market was at 90 percent completion by the administration of former Governor Ayo Fayose and that the outstanding fund needed for its completion was already paid to the contractor.

He said, “Surprisingly, Governor Fayemi stopped work at the site the moment he came into office but when he had no project to showcase for the two years he has spent as a governor of the state, he had to quickly order the contractor back to site a few months ago to put final touches on the project.”

Tracing the propensity of Governor Fayemi to scorn everything about Ado-Ekiti, Yusuf recalled that in his first term, Fayemi changed the state university’s name from the University of Ado-Ekiti (UNAD) to Ekiti State University, which was so named after the creation of Ekiti State just to distinguish it from that of Ondo State.

According to Yusuf, “Out of sheer pettiness and disdain for the people of Ado-Ekiti, Governor Fayemi changed the university’s name despite the humongous cost attached to that move. Ado-Ekiti is a place for all Indigenes of Ekiti State and there has never been any show of animosity among Ekiti people until Fayemi came and started sowing seeds of discord.”

He said further that the governor should be reminded that power is transient and, “The Ewi (the traditional ruler of Ado-Ekiti) will continue to run the affairs of the people of Ado-Ekiti even after he (Governor Fayemi) leaves office. Ewi cannot be rubbished. Our traditional institution cannot be relegated. APC leaders should caution Fayemi to tread carefully on the issues relating to Ado-Ekiti and he should restore the name ‘Oja Oba Market’ without further delay. This maltreatment of Ado-Ekiti people by this administration should stop.”